Mahindra South Africa has just launched an upgraded version of its tough and rugged 2016 Mahindra Scorpio Pik-Up range. I hadn’t driven a Scorpio for quite a while so it was good to have had the opportunity to test the latest model.

The imposing new styling, the signature front grille and integrated bonnet scoop gives the Scorpio Pik-up a positively indestructible appearance. The Scorpio Pik-up Double Cab Adventure units, which is the version we drove at the launch, come equipped with an LA Sport Front and Rear Bumper, Snorkel, Roof Rack as well as a set of alloy rims shod with P245/75 R16 Radial all terrain tyres.

On the inside, the Scorpio Double cab has full fabric seats, styled seat foams, a centre Armrest on 2nd row seats, power steering, electric windows, air-conditioner with rear vents, central locking, pockets on all four doors, decent sized cup-holders, roof-liner with sunglass and remote holder, map pockets, USB and SD Card, plus a 2-DIN stereo system with CD/MP3 Player for entertainment on the move, and audio controls on the steering wheel.

The quality of the interior is much improved and even the few bits of shiny plastic don’t look out of place. The steering wheel is adjustable for tilt only, making it a little difficult for shorter folk to find a comfortable driving position as you have to sit close to the dash in order to reach the pedals. However, in fairness, one does adjust to this fairly quickly

Interior space is generous, and particularly so for the rear seat passengers. There is excellent head-room, good knee space and a good seating position – no ‘knees-up’ sitting as in most other double cabs in its category. The Scorpio Pik-Up also has one of the more generous cargo boxes.

Safety equipment includes driver and front passenger airbags, vented disc brakes in front, drum brakes at the rear with ABS, full seatbelts for four, but the centre seatbelt at the back, is a lap-only proposition.

The Scorpio Pik-Up is powered by a mHawk 2.2-litre turbo diesel four-cylinder engine producing just 88 kW of power, while torque is rated at a lowish 270 Nm from 1 600 rpm, and is mated to a five-speed manual gearbox. However, off-roaders will appreciate its BorgWarner transfer case with high and low range four-wheel drive, which can be operated on the move. It also has a diff-lock to help keep you moving “over sand, snow, muck, ice, rocks or whatever”, according to the brand.

The launch was based at a Mid-Illovo 4×4 facility where we were able to put a Scorpio Pik-Up double cab through its paces, where it really impressed with a brilliant performance. The differential isn’t like many other locking diffs, in that it only locks down to feed power to a planted wheel when it is needed.

It’s always on, meaning that unlike many other off-road capable vehicles with a locking diff activated by pressing a button. A normal locking diff will keep both wheels spinning at the same speed to ensure planted traction, but the Mahindra’s system allows some wheelspin on one wheel before it starts to send power to the other.

It does this in a relatively balanced manner, though it can allow more slip than you might expect at first, particularly if you’ve experienced a more traditional locking differential, but it works very well.

With it’s very short front overhang, the Mahindra is able to negotiate extremely steep terrain without hassle, and while it doesn’t have huge ground clearance – only 210mm – it proved to us on the 4×4 drive that it will scramble up and successfully find, traction over some of the worst surfaces imaginable. It was basically unstoppable; however, it would benefit further from a smaller turning circle for easier maneuvering in tight situations.

The engine produces enough torque to easily propel it up hills in low range and it will creep downhill in first gear, 4L, with more conviction than many SUVs triple the price. All in all, a very impressive performance from a very impressive off-road vehicle.

As all our testing was done off-road, I’m unable to report on its on-road performance, however speaking to a colleague who had, he said it cruises quite well on the freeways, and only up very steep hills it may be necessary to drop down a gear or two to keep it on the boil, but overall he was quite happy with the performance. Diesel Consumption in the combined cycle is given as 8.8 ltr /100 km, and the tank holds 80 litres.

To conclude, the Mahindra Scorpio Double Cab Pik-Up is an affordable proposition that looks tough and rugged, and has excellent off-road performance. In terms of pricing, the Double Cab 4×4 Adventure retails for R321 995, which includes 3 Year 100 000 km warranty, 5 Year 150 000 km powertrain warranty and a 3 Year / 60 000 km service plan. 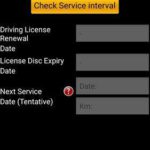 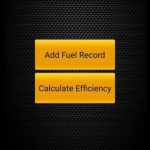 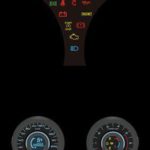 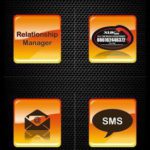 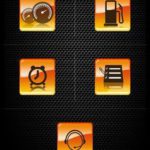 Mahindra has underlined the advanced nature of its New Age XUV 500 sports utility vehicle with the introduction of a dedicated mobile phone app.

Developed by Mahindra & Mahindra’s in-house software development team, the app has been customised for the South African market, and promises New Age XUV 500 owners a user experience as cutting edge as the vehicle itself.

The XUV 500 New Age Mobi App’s features include an intuitive guide to the warning lights of the XUV 500’s instrument cluster, including a brief description of the severity of the fault accessed by simply clicking on the icon.

A useful fuel record section allows users to enter their own trip and fuel details, allowing the app to calculate and compare fuel consumption statistics. These figures are useful for both private owners and fleet managers seeking to track costs, and identify unusual consumption changes.

Equally useful are the user-defined reminders that can be set up to provide alerts for vehicle licence renewal, driver’s licence expiry and service intervals – a very convenient way to avoid unnecessary penalties!

The ‘Contact Mahindra’ section of the app provides a convenient and direct communication channel between the Mahindra relationship manager and registered users. It also offers a one-touch connection for AA Roadside Assistance in the case of emergencies.

The app will also send a text message to any individual on the user’s contact list, and can e-mail the Mahindra customer care manager or relationship manager with queries or complaints.

The New Age XUV 500 mobi app is compatible with both iOS and Android operating systems and is free to download from the Apple App Store and Google Play Store respectively. Purchasers of the New Age XUV500 will be assisted by their sales representatives to download and set up the app on their mobile phones.

Following global sales success with the model in more than 11 countries, GWM recently launched an updated GWM M4 1,5-litre compact SUV in the South African market. The M4 has been available in South Africa since 2014, and has proven to be very popular amongst young at heart customers who reside in the city, but also enjoy weekends away.

Says Hans Greyling, GWM Sales: “Our customer base knows what they want from a car. The tighter economy has also forced customers to do their homework, shop around and get the most possible value for their hard-earned cash. The GWM M4 provides exactly that – a good-looking drive that ticks the affordability, style and safety boxes, and opens up a more adventurous lifestyle.”

The updated GWM M4 has a distinctive and dynamic look. A sporty black trim shows that every care has been taken to pay attention to detail, whilst the refined new front grille with Daytime Running Lamps (DRL) demands attention. Robust ground clearance of 185mm, 16-inch alloy wheels, a tail wing and luggage carrier complete the M4’s adventurous stance.

Powered by a 1,5-litre VVTi petrol engine that’s been designed with fuel efficiency in mind, the two-wheel drive GWM M4 has a slick five-speed manual transmission. It delivers 71,3 kW at 6 000 rpm and 138 Nm of torque to the front wheels. Power steering ensures smooth handling, and the adjustable steering column provides optimal driver comfort.

A trip computer and steering wheel with audio controls, Bluetooth and Cruise control put all the M4’s vital statistics at the driver’s fingertips. Cup holders, a cargo curtain and separated foldable rear seats with a 60:40 split make for easy organisation and extra luggage space inside the vehicle. There are also electric windows with push-down function at the driver’s seat, automatic air-con and a CD player.

The GWM M4 is available from selected GWM dealers across South Africa from R189 900 and comes with a 5-year/100 000km warranty as well as 2-year AA Roadside Assistance. A 5-year/60 000km service plan is optional.

Conceptualized and developed with the aim of creating an entirely new category, the KUV100 is a compact SUV where ‘K’ stands for the ‘kool’ & trendy generation of youth, while UV represents an SUV. The numeric ‘100’ represents the pecking order of the series which comes in below TUV300 and XUV500. With its aggressive styling and dominating SUV stance, the KUV100 remains true to the tough and rugged Mahindra DNA.

Under the hood, the KUV100 will be powered by the world-class mFALCON, an all-new engine family with options of both petrol (mFALCON, G80) and diesel (mFALCON, D75). Named after a bird of prey, the mFALCON is a compact lightweight engine built to deliver peppy and high performance, much like its namesake. The 1.2L, 61kW and dual VVT petrol engine and the 1.2L 57kW turbo-charged diesel engine both deliver high, low-end torque for the perfect SUV performance and an enjoyable drive.

Speaking at the brand name and engine reveal event, Dr. Pawan Goenka, Executive Director, M & M Ltd. said “We are all set to create a new segment with the launch of the KUV100 which also marks our foray into ground up petrol engines. An ambitious project from the very start, the KUV100, is all set to carve its niche amongst first time car buyers with its unique propositions. I am confident that the KUV100, like its predecessors, will become an extremely popular brand and will be cited for taking Mahindra to a whole new orbit”.

Pravin Shah, President & Chief Executive, (Automotive), M & M Ltd. said, “With the evolving aspirations of today’s youth we needed a product that will effectively address their needs for an SUV lifestyle. Being a listening organization, we identified the need gaps among consumers and started planning for the product. Coming from our state of the art manufacturing plant at Chakan, the KUV100 is a no-compromise, next-generation compact SUV that will set the stage for the emergence of an all new category. While being a market leader in the SUV segment, I am sure that with the addition of the KUV100 in our portfolio, we will effectively address the entire gamut of customer segments from entry level to high end SUV with our product portfolio”.

Designed in-house and engineered at Mahindra’s world class research and development facility, the Mahindra Research Valley at Chennai, the KUV100’s sculpted body with its prominent hood and high beltline has the design of a trendy urban crossover and elements like the headlamp, styled like wrap round shades, give it a whole new dimension. Targeted at the youth and first time car buyers, the KUV100 is contemporary to the core and truly stylized with best in class technologies. An indigenously developed monocoque SUV, the KUV100 will have many firsts to its credit including the first ground up petrol engine offering from Mahindra. In fact, all research & development activities for this compact SUV were aligned with global standards of quality, technology, testing norms, regulations and emissions from the very start.